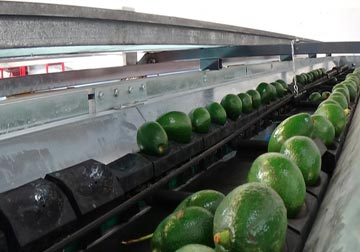 Growth in demand for tropical fruits including avocados and mangoes is creating exciting new opportunities for those companies that specialise in the technology to grade, sort and pack the products so they are in the right condition when they hit the market.
That’s according to Futura, an Italian company founded less than a decade ago began producing and selling modular electronic grading machines under the Logika brand in 2012.
Describing the machines as simple, robust and dependable for a range of different fruits and vegetables, the firm’s managing director Omar Papi says the technology is gaining ground in a number of emerging product categories, which can often mean the company is selling to clients in some of the less well-known countries of origin.
“We have expanded our Logika range, which was designed originally to handle traditional products like apples, citrus, peaches, kiwifruit etc, to cover those tropical fruits that are gaining more and more market share, like avocados and mangoes, as well as dates and dragon fruit – a product that is hardly known in Europe,” he explains.
“Because our grading machines are very modular and customisable, we are able to add the necessary accessories and variations so that these ‘new’ products can also be graded,” he adds.
Papi was speaking in Fresh Focus Italy, a new supplement published by Fruitnet Media International for the first time this year an distributed at Macfrut in Italy, China Fruit Logistica in Shanghai and Fresh Produce Forum China.
Perhaps significantly for a company which might once upon a time have dedicated most of its energy to selling its technology in Italy or more broadly within Europe, Futura’s focus is largely elsewhere, with 85-90 per cent of its turnover generated outside of Europe.
“We pay a lot of attention to the CIS countries, so Russia, Tajikistan, Uzbekistan, Kazakhstan, Turkmenistan and Azerbaijan,” Papi explains. “As well as these countries, we have long-established organisations in places like India, UAE, Morocco, Egypt, Israel and Kenya. As for Europe, the most important country without a shadow of a doubt is Spain.”
That geographical dislocation can be an advantage, Papi insists, provided you make the right allowances, for example by making systems more user-friendly and, in many cases, translating them into local languages. “As a result, our client finds themselves in front of a far more simple and intuitive system,” he says.